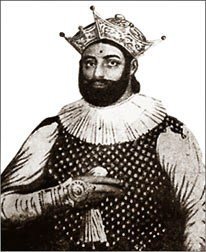 King Sri Wickrama Rajasinghe alias Kannasami was placed on the throne according to the plan of Pilimathalawwe maha adikaram though the king Rajadhi Rajasinghe died in the night of a certain day, Pilimathalawwe kept it as a secret and spreaded the news that the king is ina severe situation. He made a secret discussion with the “Anu nayaka thero” of malwathu temple and some other chiefs and asked all the other chiefs to come to Kandy immediately. Meanwhile Pilimathalawwe had a discussion with Prince Kannasami, who was just 8 years old. This discussion might be on requesting the prince to accept the throne.

In the next morning, PIlimathalawwe announced that the king is in severe condition and it’s the responsibility of chiefs and people to select a new king. Then, he described about prince Kannasami and asked the opinion of chiefs. As all the others consented, he announced prince Kannasami as the new King and named him as Sri Wickrama Rajasinghe.

On the other hand, King Sri Wickrama Rajasinghe’s uncle, Gampola Nayakkar was also imprisoned. His two daughters who were on their way from Madurai to Kandy got to know this and decided to return to Madurai. But Pilimathalawwe captured them and made them marry the king

Pilimathalawwe did all these to murder the king later and possess the throne. But his next plan was unsuccessful. He tried to convince the king that Erewwa Adikaram and Dambagamuwa Disave were Treasonous.

But since this didn’t happen, he murdered both of them, Erewwala adikaram was a honorable man who was popular among people. Other chiefs, who got to know that Pilimathalawwe murdered him, disgusted him.

Meanwhile, Kind Sri Wickrama Rajasinghe was pious king, who rendered a great service to the upheaval of the Kingdom. So Pilimathalawwe realized that, its impossible for him to obtain the throne. Thus he decided to ask assistance from British.

On the same year Kannasami became the king (1798), the Fedrick North was appointed as the First British governor in Sri Lanka. Pilimathalawwe adikaram conduct few secret discussions with Sir Fedrick North and his Secretary, Heu Cloghan since February 1799. Later he used several tactics to aggravate British put all these attempts were unsuccessful. A group of ambassadors lead by Meegasthenna the 2nd adikaram was sent to Colombo to have discussion to get into a trade treaty. Meegasthenna has discussed about executing the king. But it was also rendered unsuccessful.

Meanwhile a group of Malay merchants from Puttalam were robbed at Kandy in June 1802and eventhough North demanded compensation from the Kandyan King, King didn’t respond for it. Thus they made the cause for declaring war against Kandyan Kingdom.

An army was sent from Colombo led by McDowel and another army from Tricomalee led by Babrat in January 1803. Since the King and Chiefs had retreated, the British were able to capture the citadel without much effort. Thereafter, they placed prince Muththusami on the throne on 3rd March 1803. Pilimathalawe was aggravated by this and in order to revenge, he asked British troops to flesh the king at Hanguranketha. Due to the guerilla warfare of Sinhalese, most of the British were killed & the King regained the throne.

In 1804, Sir Fedrick North again planned to attach Kandy. But, due to disputes among his chiefs, this was not implemented. Meanwhile British Parliament was unsatisfied with North and decided to dismiss him. Thus he had to resign from his post.

After Sir Fedrick North, Sir Thomas Maitland was appointed as the Governor in July 1805. He maintained a peaceful environment with Kandy. His objective was to govern the maritime area methodically.

Meanwhile, the situation in Kandy mined to worse. King Sri Wickrama Rajasinghe begun to suspect his chiefs. In early 1805, he imprisoned Pilimathalawe and Meegasthenne. But had to release them in order to do the administration properly since the king was sick. Later Meegasthenna died due to sickness and Ehelepola a nephew of Pilimathalawwe was appointed as the 2nd Adigar.

Due to displeasure towards the king, Pilimathalawwe created rebels in Udunuwara and Yatinuwara. Also he bribed the royal cook to poison the food given to King, barber to cut the ears and neck of the king, bribed malay muhandiram to kill the king. And Siyambalapitiye Satambi to stab the king in the bathroom. But these plans wre revealed and Pilimathalawwe, his son and Ratwatte, a nephew of Pilimathalawwe were imprisoned. After the court proceedings the accused, including Pilimathalawwe, Ratwatte and Daulagala rate Mahaththaya were ordered to be executed.

Then Ehelepola was appointed as the Chief Adigar. And his opponent, Molligoda was appointed as the 2nd Adigar. Since the king was not satisfied by the actions of Ehelepola, at the 2nd marriage ceremony of the King, he was sent to sabaragamuwa. Molligoda, expecting to make disputes between the king and Ehelepola, distarted the letters sent by Ehelploa to the king and informed the king that the golden crown and the sword made by Ehelopola in order to gift the king at his wedding ceremony were made to himself to be crowned also, news about Eheloepla’s treasons, reached the king daily. Even though the king ordered Ehelepola to visit the palace and answer for the accusations, he didn’t come. It’s said that, Ehelepola didn’t receive these letters and that Molligoda is the one who replied for these letters.

Thus the king dismissed Ehelepola and appointed Molligoda as the chief adigar and sent a troop to sabaragamuwa to flech Ehelepola, in may 1814. Ehelepola, along with some other men fled to Colombo.

To revenge Ehelepola, the king ordered his family to be massacred brutally. Due to mistrusts, he ordered  Mampitiya to be impaled, killed Leuke disawe of sathra korale who negotiated a treaty with the dutch and killed ven. Parantala thero. Thus kandyan people lost their loyalty towards the king due to his blood thurst.

In November 1814some low country merchants were captured in Kandy, suspecting them as spies. Their arms and legs were cut and sent back. Thus, british declared war against kandyan kingdom on 10th January 1815. Troops ere sent from Negambo, Galle, Trincomalee and Batticalo. The governor, Sir Robert Brownrigg led an army from Colombo. Chiefs including Molligoda joined British since Ehelepola sweared that the aim of this battle is not to invade the kingdom, but to dismiss the king. Yet when British announced that sathara koralaya is invaded by them, which was ruled by molligoda, the chiefs realized that they were misled.

On 14th February 1815 a british troop was sent to kandy and the king fled to medamahanuwara, along with his 2 queens moudy kannamma & vankada Rangammal. Some of the others who accompanied the king were,

The king and his queens were banished to Vellare in the ship “convolis” on 24th January 1816. He was received by high ranking British troops headed by Majors McDonald and Marricut and was kept in the place of the son of sultan of Trpara “fletch Hyder” palace. After 17 years of imprisonment. He died on 30th January 1832 at the age of 52.